Racism is Alive and Well and can be said out loud on daytime radio.

In a recent incident on LBC radio (29/03/2021), David Lammy defended his right to be English.  Yep, here we are in 2021 and talking about this little gem that keeps popping its ugly head up.  That’s where we are at in terms of racism in this country.  He was speaking on his show on LBC radio and a caller named Jean rang in to inform him “You will never be English, you are African-Caribbean”.  She went on to say “Well all I would say is the whole world is polluting everybody the way it is going… because you are what you are.”

Here in a nutshell, is the reason why a sense of belonging is so difficult to foster.  The idea that if you are not white, you cannot possibly be English has been at the heart of immigration hate and ultimately the rotten core that ran through the Brexit campaign.  Here it is, in broad daylight, said out loud to his face.  He was commended all round by the media for his response which outlined colonialism and laying his claim to being able to claim Englishness by stating “but it is to say that for me, the fact that I was born here and the fact that my sensibilities are English mean I want to claim that heritage as well.”

I remember watching the news through the Brexit campaign and being shocked at the time that people were saying out loud what I had always closed my eyes and ears to.  I never really wanted to face the stares or the acknowledge the little quips which made me feel that I was a stranger in my own country.  Then they were on TV saying things like, “they don’t have their roots here” or “my heritage goes back 600 years and I can trace my heritage here; that makes me English”.  I can’t claim that my family have been here for generations, because they haven’t but I have no other place to call my home.  Its all I know.  What happens to us in this ‘us and them’ fight for the most worthy spot in this country.  Being English has so many different reasons to not be a source of pride.  Ask the other nations that make up Great Britain.  There is something so destabilising about having to justify where you belong ALL THE TIME.  Its worse than destabilising, its debilitating.  It takes away so much from my experience of the world.  In a place that I may choose to live, I would do so with autonomy and an acceptance of the difference I would bring.  For example, if I chose to live in France, I would expect to not be able to speak the language as fluently as I could my mother tongue (which bloody well is English by the way!) and I would understand that my values may be different or that the way I do things may be unusual for the cultural context.  But I would go into that situation with eyes wide open, prepared to learn, accept a new way of being and adapt to my surroundings.  Now people are telling me that even though I was born into it, I don’t fit.  Even if I do the work to assimilate and I lose the accent, lose the religion, push away the things that make me ‘different’ I still don’t belong?  There’s no fighting that; there’s no formula to follow to get it right.  Inevitably, the ‘othered’ simply have to say “fuck you” and live their lives as best they can, knowing they will never be good enough.

I understand that the lady who confronted Lammy about his ‘Englishness’ was an outright racist.  I’m not sure how that compartmentalises it but it seems to for me.  Even in calling such an obvious case of racism out seemed to need to use inverted commas by a media outlet:

Apparently even outright racism needs to be qualified and softened, perhaps just in case the white sensibilities of this individual may be offended by the term.  “You can’t be English because you are black…but I’m not a racist”??  Please.  Incidentally, the wording that was available on the Google search which brought up the link above has mysteriously disappeared when accessing the actual page.  On the page itself, the headline has morphed into: 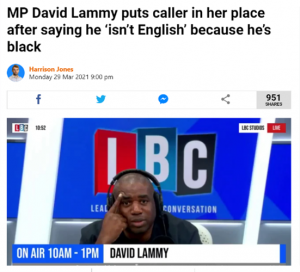 Much less accepting of the overt ‘racism’ perhaps. Or maybe it was because for once, the online world seemed to praise David for his calmness and willingness to engage in a conversation with this person to try and change her mind.  In the midst of outward support for Lammy, perhaps it seemed disingenuous to question the validity of the racist event itself.  Or maybe I’m far too cynical.

The outright racist is generally easy to spot but no easier to fight.  I don’t quite know what I would have done if I were in his shoes.  I would have frozen perhaps and tried to ask questions as to where she thought I did belong.  But there would have been an overwhelming sense of a huge mountain to climb that had no end would have stopped me in my tracks. It would have required me to be fully prepared with an armour already engaged to deflect the pain to then be mentally available for debate.  It would require me to be able to drink in the anger, the frustration and put a smile on it.  It would be easier to give up before I’d even started.  So, back to the usual repertoire of ‘putting up and shutting up’ which never changed anything.  Part of the solution that I have heard other people suggest seems to be simply allowing time to take its course.  Waiting for these opinions to die out with the generation that holds them because they were from a different era or that the challenge would be too much.  I understand that and I’ve colluded with this ‘solution’ too.  However, it doesn’t make my pain any less and allows this rot to set in deeper.  It also obviously doesn’t work if racism exists in younger generations.  Waiting for racism to die, I would say, isn’t a successful plan.

My strong reaction to this racist lady’s comment is perhaps something to do with that niggling feeling that actually, there are large swathes of the population who still believe this.  They still think that even though people of colour are born here, they don’t quite ‘know our ways’ or haven’t really ‘assimilated’.  I hear it in those comments about areas of London where I grew up and again in parts of Leicester where I live now.  Streets lined with shops selling weird and wonderful food from different parts of the world and where people choose to settle in their diasporic groups.  Its happening with migrants from white communities also as we have seen from Eastern Block countries, perhaps the catalyst to push the Brexit campaign to success.  I’ve always seen these shops, supermarkets, restaurants as being an exciting place of discovery, a chance to try new foods or feel like you are in a different country in your own backyard.  I also understand that this is not a viewpoint held by all and the encroachment of different cultures into ‘English’ spaces has felt like a loss rather than a gain.

My feeling that I will never be ‘English’ has been confirmed to me throughout my life in subtle ways.  I see those reactions from white people when they encounter me; little surprises in the eyes when I say my favourite band was The Beatles or they hear I was brought up a Catholic or that I’m going on a walking holiday in the Peak District.  Apparently, not only are all these things quintessentially English, but they are only really meant for white people.

These little non-verbal forms of communication are specified in body language and are never said out loud in quite the way Jean did, but those little surprised looks immediately tell me that I have shifted an already solidified perception of me, a perception borne out of beliefs and ideas held because of the presumptions made on the colour of my skin.  Quick check in here….that’s racism.  It used to make me proud that I could destabilise someone in such an easy way.  It used to make me feel like I was doing it right; I was assimilating and ‘fitting in’ and doing things in the ‘English / British’ way.  Now, knowing what I know, it doesn’t feel so good.  It doesn’t make me proud.  It makes me question what perception is held about me without me even opening my mouth and makes me wonder who I would have been if the narrative meant I was accepted from the outset.

I keep coming back to Lammy’s reaction and how calmly and quickly he was able to call upon his experience and knowledge to counteract Jean’s racist comments.  I don’t know how quick I would have been to anger, but at the moment, it feels like that is the first place I would have jumped to.  Mainly because I’m thinking about this stuff a great deal now.  Previously I would have jumped to silence, internalisation, internalised anger (leading to depression) and an inability to articulate which would have left me sitting with all of that on my own and no place to vent.  I don’t feel able to stop talking, thinking, reading and writing about this stuff now until I get myself into a place where I can receive racism, process it, and feed it back in a more manageable form in the time scale he did.  (For us therapists:  its some of Bion’s theoretical work in practice and yet, here seems like another missed opportunity in not applying critical race theory).  When I feel able to hear racism levelled at me and I don’t shut down, I know I will have reached a new stage in my personal development.  I’m getting there but not there yet.  Well done David.

Response to the Sewell Report

Racism is Alive and Well…

Free Music for All!